Aesop, Egypt, and the Origins and Reception of Fables 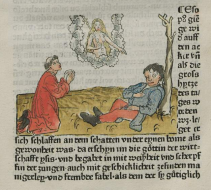 ABSTRACT: Traditionally, fables are defined as story-telling devices that are used as moralizing lessons, and are associated with Classical and Western culture; the fables of Aesop and La Fontaine, which have had an immense influence on modern contemporary culture, are perhaps the best-known examples. In fact, Aesop’s fables are often credited for the origin of modern day fables and have had a major influence in our contemporary definitions of what fables are.

This talk will discuss fables that were developed before the hegemony of Western culture, and consider the role that Egyptian and Near Eastern narrative traditions had in influencing Classical sources, such as Aesopian fables. In this investigation, we will reevaluate the structure of the fable as a narrative device and reconsider its origins by looking at Babylonian contest literature and Egyptian myths that have been recorded in demotic and Greek papyri, and which may be illustrated in the ostraca and papyri of anthropomorphized animals from the site of Deir el-Medina. 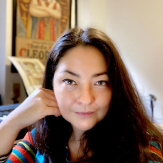 Dr. Jennifer Miyuki Babcock is an Adjunct Instructor at the Fashion Institute of Technology, a Visiting Assistant  Professor at Pratt University, and also an adjunct faculty member at The New School. She teaches survey art history  courses that range from prehistory to modern times, and also leads classes that focus on the ancient Mediterranean  world and its intercultural exchanges. Prior to teaching, she was a Postdoctoral Curatorial Associate at The Institute  for the Study of the Ancient World and has held research and fellowship positions at the Metropolitan Museum of  Art, The Museum of Fine Arts Boston, and the Brooklyn Museum.

Dr. Babcock earned her PhD at the Institute of Fine Arts, NYU in ancient Egyptian art and archaeology in 2014. Her dissertation, The Imagery of Anthropomorphized animals in New Kingdom Ostraca and Papyri: Their Artistic and  Cultural Significance demonstrates how the images of anthropomorphized animals are linked with major aspects of  Egyptian art, such as narrative, parody, and aesthetics. Currently, Dr. Babcock is revising her dissertation into a  book, and her manuscript, Tree Climbing Hippos and Ennobled Mice: Animal Fables in Ancient Egypt, is in press  with Brill Publishers. Faculty development grants and awards from The New School and The Fashion Institute of  Technology have supported her research interests, including the construction of visual narrative and the  development of ancient Egyptian iconography.

Redefining the Hyksos: Immigration, Foreign Pharaohs, and Their Impact on Egyptian Civilization

Abstract: The Hyksos are often set up as the boogeymen of ancient Egypt – after a violent invasion, these foreign despots ruled the North of Egypt with an iron first, while a native Egyptian family in the South fought for Egypt’s liberation. However, archaeological investigation and the reanalysis of ancient texts shows that this narrative is simply political rhetoric created by the Egyptian kings to legitimize their own rule. In reality, the Hyksos were creatively strategic about the display of various aspects of their identities. To become fully Egyptian was never the goal; instead they actively maintained and advertised elements of their origins in order to support their ties to kinship and trade networks in West Asia. These kings were cosmopolitan diplomats who corresponded with much of the Near East and Eastern Mediterranean, and whose capital city was a titan of trade. They adopted and adapted elements of traditional Egyptian kingship, but negotiated these traditions with a West Asian spin, creating a rule uniquely suited to the eastern Delta. Further investigation of the social memory of these kings has even demonstrated that they were considered legitimate kings and the major power in Second Intermediate Period Egypt. In fact, the Hyksos and the West Asian immigrants of the period had a massive impact on Egyptian society, culture, and conceptions of kingship. The archetype of New Kingdom Egypt, considered the apex of ancient Egyptian society, would not have been possible without the influence of these West Asian immigrants or the rule of the Hyksos.

Bio: Danielle Candelora is an Egyptian archaeologist and an Assistant Professor of Ancient Mediterranean History at SUNY Cortland. She earned her Ph.D. in Near Eastern Languages and Cultures from UCLA, and her dissertation is entitled: Redefining the Hyksos: Immigration and Identity Negotiation in the Second Intermediate Period. Her research investigates the multivariate processes of identity negotiation in the Eastern Nile Delta during the Second Intermediate Period, an era of intensive immigration from the Levant which culminated in the rule of the Hyksos in the North of Egypt. She explores how immigrants integrated into and influenced Egyptian society, as well as the cultural blending which resulted. Danielle is a co-director of the AEF Osiris Ptah Nebankh Research Project, a co-director of the Museology Field School at the Museo Egizio di Torino, and a member of the UCLA Coffins Project directed by Kara Cooney.

A talk by Maggie Bryson that discusses the aftermath of the reign of Tutankhamun, what happened after his death as well as the lasting impacts of the Amarna period on Egypt. She discusses the role of the general Horemheb and the transition to the next Dynasty.

Nozomu Kawai explains the political situation during the reign of King Tutankhamun and highlights the most important women and men in his court. He also details the vast building program of the King and what could be his motives behind it.

The Lineage of Tutankhamen

This talk, by Dr. Aidan Dodson, discusses Tutankhamen’s family history, the DNA studies done on his mummy and some of the objects found in his tomb.

Inside the Tomb of Tutankhamen

Dr. Salima Ikram discusses the tomb’s treasures and decorations, as well as the king’s mummy and what is unique about it.

We talk with Dr. Kenawi about the Amasili Project: the multidisciplinary conservation of an Ottoman-period house in the center of Rosetta. In addition to learning about its novel approach to heritage conservation, we discuss threats to heritage sites and consider some unanswered questions about Egypt’s last Ptolemaic rulers.

ARCE is hard at work preserving many sites in Egypt for future generations. Please take a look at virtual tours of some of these sites.

The Jewish cemetery of Basatin

The Tomb of Menna

The Museum at the Monastery of St. Anthony

The Temple of Khonsu at Karnak

The Statues of Rahotep and Nofret

Send Us a Message