A Royal Osirian Funerary Rite? Evidence for the Awakening of Osiris Ritual from Tutankhamun’s Tomb (KV62)

100 years after its discovery, the tomb of Tutankhamun continues to be the focus of numerous Egyptological studies and scholarly research. Due to Howard Carter’s meticulous and thorough documentation of the tomb, it’s possible today to continue to “excavate” the tomb and make new discoveries about ancient Egyptian religious beliefs, kinship ideology, and funerary practices. This includes a reanalysis and new interpretation of the layout of the Burial Chamber as related to the Awakening of Osiris Ritual.

The earliest depiction of the Awakening of Osiris Ritual comes from the 19th Dynasty, which represents the reanimation of Osiris by his son Horus in the presence of various deities connected to the Osirian myth. In the scene, the mummiform figure of Osiris lays prone and enshrined upon a lion bed, surrounded by various crowns, weapons, clothing, and other emblems. It is here argued that Tutankhamun’s Burial chamber is a physical manifestation of this ritual, which is not only represented in image and text, but also by objects and even the body of Tutankhamun himself. First, the author introduces the Osirian ritual and discusses its origins. Then, several examples of the ritual’s emblems and tools are compared between the two-dimensional depiction of the scene and the three-dimensional layout of the Burial Chamber. Finally, the author proposes a number of hypotheses for why this ritual physically manifested itself within Tutankhamun’s burial, and how this analysis provides us with more information on royal funerary practice during the New Kingdom.

Brown is an American Egyptologist who has worked as an archaeologist in Egypt since 2011. He received his MA degree in Egyptology from the American University in Cairo in 2016, and currently is an Egyptology PhD candidate at UCLA. Currently he lives between Los Angeles, CA and Cairo, Egypt. His excavation experience includes working with archaeological sites in Aswan (at Elephantine Island and Wadi el-Hudi), as well as funerary sites in Luxor, Amarna, and the Sudan. In 2016, Nicholas spent the summer working at the MFA, Boston as the Terrace Curatorial Research Associate in Egyptology. He returned to the MFA over the summer of 2019 to conduct archival research for the Egyptian Art Department’s exhibit “Ancient Nubia Now.” Nicholas’s research interests include funerary material culture from the New Kingdom, as well as the use and perception of ancient Egypt within modern contexts. 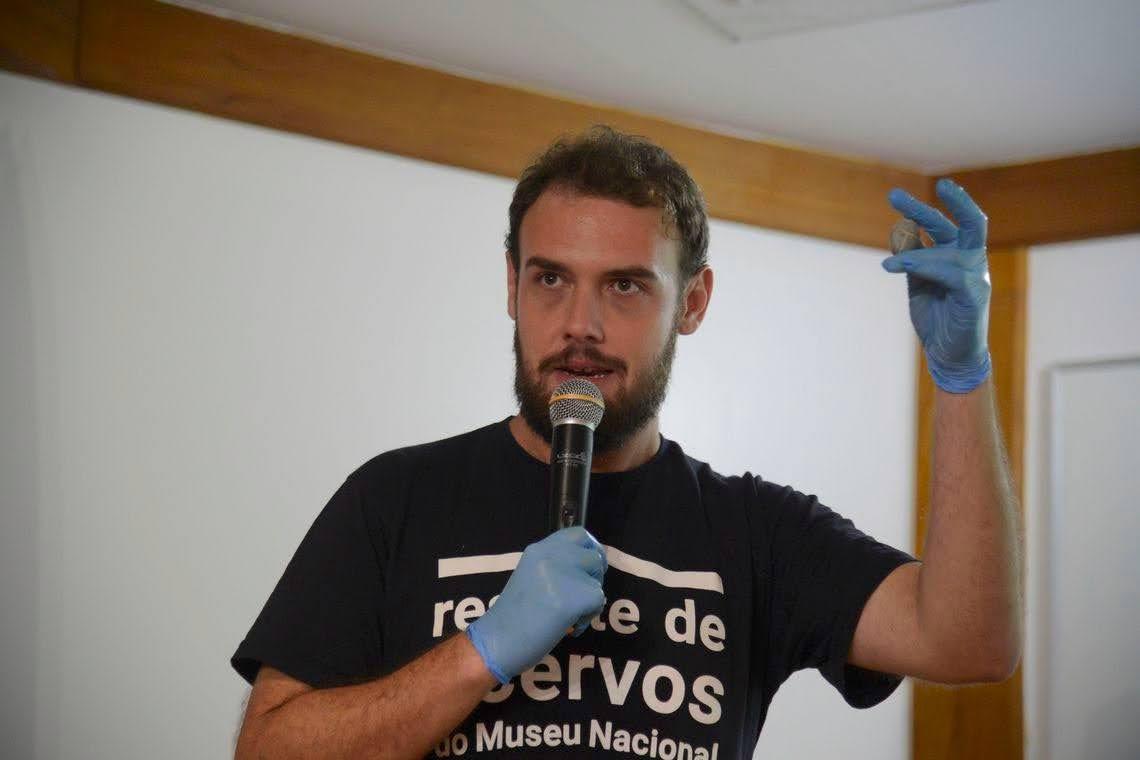 ABSTRACT: On the night of September 2 of 2018, a major fire struck the National Museum of Rio de Janeiro, located in the Palace at Quinta da Boa Vista, a building of historical importance, and the oldest scientific institution in Brazil. Before the fire, this museum had the largest collection of Egyptian artifacts in Latin America.  After the tragedy, a major salvage excavation was conducted in the site to recover the artifacts that survived the fire.  This lecture aims to give a glimpse of this work which brought back more than 300 objects of the Egyptian Collection of Rio de Janeiro.

ABOUT THE SPEAKER: Pedro Luiz Diniz Von Seehausen received his PhD from the Federal University of Rio de Janeiro and works at the National Museum of Rio de Janeiro in the division of archeology. He was part of the rescue party that conducted the salvage excavation in the wreckage of the museum after the fire of September 02 of 2018 and was responsible for the section where the Egyptian Collection was located. He is a member of the Argentinian Mission in Luxor which has worked at the funerary complex of Neferhotep (TT49, TT187, TT362, TT363, TT347 and TT348) since 2014. He also works in the field of 3D technologies, digital imaging and virtual reality applied to museums.

On behalf of the American Research Center in Egypt and our ARCE-NY Chapter, we are pleased to invite you to our King Tutankhamun Centennial Celebration Chapter Lecture Tour. Join us to hear from renowned Tutankhamun scholar Dr. Marc Gabolde and learn about his quest to discover what happened to many of the artifacts that were found in the tomb of Tutankhamun.

The Fate of Missing and Diverted Artefacts from Tutankhamun’s Tomb

Due to current health and safety guidelines, seating is extremely limited.

The Burials of the 25th Dynasty and Napatan Kings

ABSTRACT:  Although they were badly plundered, the tombs of the kings of the 25th  Dynasty pharaohs and their Napatan successors at El-Kurru and Nuri still contained numerous fragments of their original funerary equipment which were carefully recorded and preserved by the Harvard University-Museum of Fine Arts Expedition. This record gives us an opportunity to reconstruct what these interments were like and how they reflected both Nubian artistic tradition and selective adaptation of Egyptian motifs.

His archaeological fieldwork has included excavations at the Valley of the Kings at Thebes, the Palace city of Amenhotep III at Malqata in Western Thebes, Abydos, Hierakonpolis and at the Giza Plateau, and currently he is directing the survey and restoration of the site of Deir el-Ballas.  His publications include studies on Daily Life and Urbanism in Ancient Egypt, Egyptian Mortuary Traditions, and the Material Culture of Ancient Egypt and Nubia.

Sacred Deities of Ancient Egypt: A Pantheon of Paradoxes viewed from a Jungian Perspective

ABSTRACT:  Jacqueline Thurston’s presentation, drawing on ideas and her photographic images from her book Sacred Deities of Ancient Egypt explores the archetypal nature of the divine feminine and the divine masculine. It examines the presence of dualities and opposites contained within a single deity and the role that paradox plays in the dynamic relationships between individual deities. Our contemporary interest in gender and identity makes the exploration of the attributes of both feminine and masculine deities in the ancient Egyptian pantheon intriguing, informative, and relevant. The presentation will also explore how powerful vicissitudes of nature, like the pandemic through which we are living, shaped Egyptians’ vision of their gods. The presentation raises intriguing questions. Why, for example, did the ancient Egyptians choose a pair of feminine deities – Nekhbet, a vulture that fed on the decaying flesh of dead creatures; and a cobra, Wadjet, a lethal serpent – as guardians of the pharaoh? The presentation approaches these questions from a psychological perspective informed by the ideas of the Swiss analyst C. G Jung.

ABOUT THE SPEAKER: Jacqueline Thurston, M.A., is an artist, writer, and Professor Emerita in the School of Art and Design at San Jose State University, where she taught for over forty years. She is twice the recipient of a National Endowment for the Arts Photography Fellowship and was a Fulbright Scholar to Egypt. Her first artist’s book, Shadowland was purchased by the Library of Congress for their Rare Book Collection. Thurston’s photographs are in major national and international museum collections, including the San Francisco Museum of Modern Art; the Library of Congress; the International Museum of Photography; the Carnegie Museum of Art; the Albright Knox Museum; the Cantor Museum; the University of New Mexico Museum of Art; the Center for Photography at the University of Arizona; the Bibliothèque Nationale, France; and the Bibliothéque Alexandria, Egypt.  Forty photographs inspired an exhibition curated by Dr. Lorelei Corcoran shown at the Art Museum of the University of Memphis.

Excavating the City of the Snake Goddess: Flinders Petrie at Tel Natasha

ABSTRACT:  In the early months of 1886, Flinders Petrie arrived in the eastern Nile Delta at an out-of-the-way site south of Tanis known as Tell Fara’un or Tell Nabasha (ancient Imet). Petrie and his assistant Francis Griffith worked at the site for several months uncovering a vast temple complex dedicated to the goddess Wadjet, a cemetery spanning the New Kingdom to the early Medieval Period, and the remains of a Late Period settlement. The speaker has worked on Petrie’s excavated material from Tell Nabasha since 2014, as well as conducting excavations at Tell Nabasha in 2015 and a remote sensing survey in 2016. Using this research, along with archival material pertaining to Petrie’s work at the site, this talk will explore what Petrie found in 1886 and how these finds can help us reconstruct the chronology, development and function of the ancient city of Imet, the cult center of the snake goddess.

ABOUT THE SPEAKER:  Dr. Nicky Nielsen is a Senior Lecturer in Egyptology at the University of Manchester. He specializes in New Kingdom and Late Period material culture as well as settlement archaeology. He has excavated at various sites in Egypt as well as Turkey and the UK. He is the author of Egyptomaniacs: How We Became Obsessed With Ancient Egypt (Pen and Sword, 2020). He also researches effective distance learning techniques and has co-published From Mummies to Microchips (Routledge, 2020), a handbook about effective distance learning strategies in the humanities together with Professor Joyce Tyldesley.

ABSTRACT:  The pyramids, royal cemetery, and necropoles of Napata (an ancient Kushite political center)  at Nuri comprise more than 7,500,000 square feet and today remain largely unexplored. Initially the site of more than 80 burial monuments, Nuri served as the resting place for at least 60 kings and queens corresponding to the Third Intermediate and Late Periods in Egypt. The first royal known to be buried at Nuri was the biblical pharaoh Taharqa (protector of Jerusalem, per 2 Kings 19:9), whose tomb was cut into the bedrock deep below his pyramid. His descendants used the site for four more centuries, and others for centuries more beyond. Partly excavated only once before, in the 1910s, Nuri remains poorly published. In 2017, a new archaeological mission was initiated. This presentation discusses its progress with particular attention to underwater excavations conducted on site.

As a result of climate change, intensive agriculture nearby, and the construction of dams along the Nile, rising groundwater has submerged many of the tombs cut into the bedrock, likely including all of the subterranean pyramid chambers of the kings. Today, at least four kings’ burial chambers remain unexcavated. Since 2018, the Nuri Archaeological Expedition has been excavating the now underwater burial of one such king, the last Kushite king interred at Nuri: Nastasen (ca. 335-310 BCE). Supported by grants from the National Geographic Society, excavations of Nastasen’s pyramid and tomb represent the first attempt to conduct underwater archaeology in Sudan. While not yet completed, significant discoveries were made and will be discussed within the framework of Nuri as a whole and the site’s great potential to inform us about the people of Nuri through the generations and environments in which they lived.

ABOUT THE SPEAKER:  Dr.Pearce Paul Creasman is an archaeologist in the fields of Egyptology, maritime archaeology, and dendrochronology who holds a PhD in nautical archaeology from Texas A & M University. He is currently director of the American Center of Research located in Amman, Jordan. Previously, Dr. Creasman was an associate professor of dendrochronology and archaeology at the University of Arizona (where he remains affiliated faculty), focusing on the heritage, archaeology, and the environment of the Middle East and North Africa. He has been conducting archaeological and environmental research in Egypt and Sudan since 2004. His current archaeological project is the excavation at the pyramids and royal necropoles of Nuri, Sudan, a UNESCO World Heritage Site. Dr. Creasman is editor of the peer-reviewed Journal of Ancient Egyptian Interconnections and the author or co-author of more than 100 articles and edited books.